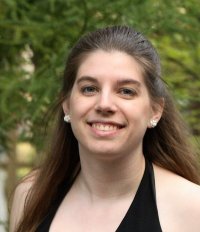 Born and raised in the San Francisco Bay Area, composer Jessica Rugani traces her musical development from an early interest in piano, to a focus in clarinet, and finally to composition.  She earned degrees in music composition from The Hartt School at the University of Hartford (D.M.A. 2018), New England Conservatory (M.M. 2011), and California State University East Bay (B.A. 2006).

Rugani has written for varying ensembles, from the unusual bowed piano ensemble to the more traditional full orchestra.  Elegy (2012), commissioned by the Petit Family Foundation in memory of Jennifer, Hayley and Elizabeth Petit, was premiered at Miss Porter’s School in Farmington, Connecticut. Her band work, Around the World (2010) was performed at the 2013 Association of Community Bands Convention in San Ramon, California. In 2013, her work To Laugh Often and Much, commissioned by Mary Matthews, was premiered at the National Flute Association Convention in New Orleans​. Her works have been premiered on new music concerts in Jordan Hall and other venues in Boston, and performed in several states, including Connecticut, California, and Washington.

Jessica has worked with members of the San Francisco Symphony and the Kronos Quartet, and studied composition with Robert Carl, Michael Gandolfi, Rafael Hernandez, and Kurt Rohde.  She currently resides in the Bay Area with her family.